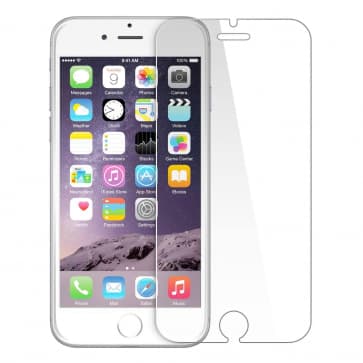 This is a professional, new crystal glass shield film that is ultra-thin (0.2mm), and it has a 2.5D arc edge technology (beyond the industry limit), Made of real glass with a 9H rating.  Delicate touch feels like the original glass of the phone.  All corners are rounded.

GLAS.tR for iPhone 6 6s is made to protect the LCD from damage and scratches with specially processed transparent glass that has been reinforced to increase shock absorbency. The R in GLAS.tR stands for the rounded edges of the screen protector. Being made of glass, the edges of the screen protector are the most vulnerable to chipping. The rounded edges help to deflect shock from bumps and drops. The glass has been designed to be 28% slimmer and still maintain its high level of surface hardness of 9H. When installed, there are no gaps between the LCD and the GLAS.tR SLIM which means the touch screen's sensitivity is unaffected. To prevent any excess force from coming in contact with the edges of the screen protector we highly recommend that a case is used with the GLAS.tR SLIM.

-Surface hardness: 9H : The surface of the GLAS.tR has a hardness of 9H. Even sharp objects such as knives and keys will not scratch the GLAS.tR.

-Rounded Borders: The edges of the GLAS.tR are tapered to be chip resistant and more durable.

-Oleophobic Coating: The GLAS.tR has an oleophobic coating that prevents fingerprints and other contaminants and makes the film easy to clean.

-Delicate Touch: The GLAS.tR is coated on the back with a strong silicon adhesive that makes installation easy and attaches the film firmly so as to not affect the touch   screen's sensitivity.

-Anti-Shatter Film: If broken, the GLAS.tR breaks into small pieces that are not sharp, making it safer than other glass products.

*When removing for re-use, the adhesive properties might wear off to an extent where the screen protector will not adhere to the device. It is not recommended to reuse the GLAS.tR once it's been applied. *Using excessive force when installing or removing the screen protector may damage the product.Includes:

Excellent product
The product is high quality and very useful! Review by Fred (Posted on 2/1/2015)

Write Your Own Review
Tags
Tags

Use spaces to separate tags. Use single quotes (') for phrases.